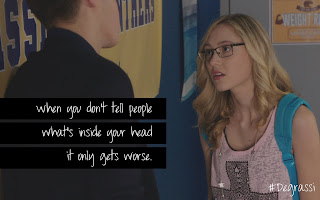 Today also happens to be R U OK day which is day that encourages people to ask their friends how they really are going and listen to them. So it seemed fitting to post this post today.


Mental health is rarely shown in depth on tv or in movies, I think because there is a lot of conflict surrounding it and its hard to portray in a positive light. Eating disorders are shown more often than any other type of mental disorder as you can see the effects of it physically and its an issue that won't cause a lot of conflict when they show it as it has been done before.

Glee - Glee has covered eating disorders (Quinn and Mercedes both struggled with peer pressure to be thin thanks to Sue Sylvester) and a suicide attempt. Though neither were done in major detail you could see the affects it had not only on the main character struggling with it but the rest of the cast. 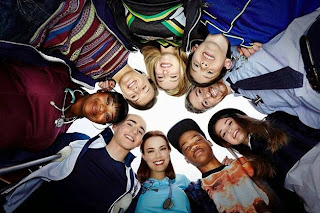 Suits - This is a more recent show that has shown mental health and it was extremely unexpected! Harvey Spector has been struggling with panic attacks due to his secretary Donna leaving him which has brought back past memories of when his mother left him. He has been seeing a phycologist and you get to see how he struggles with coming to terms having a weakness and needing help.

Red Band Society - One of the main characters Emma struggles with an eating disorder and has been hospitalised for it. It isn't mentioned much at the start apart from that you know that is why she is in hospital but eventually you get to see the mental struggle and how it began later on in the series.

The Fosters - Sophia, Callies half sister is diagnosed with bipolar disorder in season 2 and you get to see how she struggles with talking about it and realising that this is an ongoing thing.

Open Heart - Mental health plays a big role in this show though none of the main characters have it. Dylan's father has gone missing unexpectedly but it turns out that he has bipolar disorder and that could be one of the reasons why he is missing. You get to see Dylan come to terms with that and question all his weird quirks, along with her sister who begins to question if she may also have it after realising that its genetic. It's great as it shows how mental illness can be hidden so well that sometimes someone you think you know well could be struggling with it.

Degrassi: The Next Generation - Hands down the best show that portrays mental illness flawlessly. You get to see how mental illness affects everyone along with the character struggling with it. the following characters have struggled with mental illness: 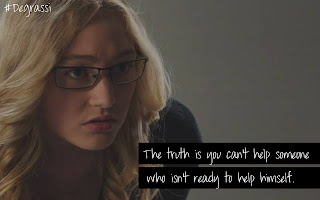 These are just the main characters who have struggled with mental health this doesn't include Adam who struggles with beings transgender and the many other LGBT characters (Marco, Tristan, Fiona, Imogen the list goes on!). The girls who have been sexually assaulted (Zoe, Paige and Darcy). The school shooting that happens which has a domino affect on so many of the characters and lands Jimmy Brooks in a wheelchair. Teen pregnancies (Jenna, Liberty and Claire), cancer diagnosis's (Spinner and Claire), accidental deaths (JT due to a stabbing and Adam because of a car crash). Degrassi has covered all the hard topics and knows how to do it well and in a realistic way, they don't glamourise anything and will often re bring up the topics during much later episodes a great example of that is with Maya and how Campbell killing himself has made such a lasting effect on her and has in turn caused her to have anxiety. If you want to see mental health issues portrayed right on TV watch Degrassi and you will be amazed with how well they can do it.

***updated to add the following***
Lost and Found Music Studios - This was very unexpected and I thought how it was approached and covered was done really well (spoilers coming). When we first meet Clara we think she is just a perfectionist and having some stage fright issues but as season 1 goes on we see something more going on under the surface. It's not until season 2 it really goes into detail and we see Clara have this battle going on inside her, she wants to be accepted and is willing to do anything which means putting her mental health on the line. Just when we think she has found herself she has a breakdown in the form of a panic attack and its shown really accurately and John comes to her rescue. This was another surprise as though we knew early on that John's mother was dead we didn't know how and it comes to the surface that she killed herself and John has struggled with accepting it and wondering if he did something to cause it. We also see him go through shame and realising that what she did was wrong and not acceptable. So for John to find and help Clara makes a lot of sense and we get to see both sides of mental illness struggle. Clara eventually gets the help she needs from her parents and its decided that she needs to seek inpatient treatment and they really drive home the point that its nothing to be ashamed about and it's a good thing she is getting help. I am hoping for a season 3 so we get to see Clara's recovery and how people react to it. (Did you know that the actress who plays Clara played a young Donna in Suits which is why she may look familiar!).

Degrassi Next Class - While I could've included this with Degrassi: Next Generation I felt that as its technically another series (or at least spin off) it deserved to be added separately. In the 3 seasons of the show a lot of Mental Illness (and surround issues) has been covered which is a huge achievement! The following characters have struggled with Mental Illness either directly or indirectly:

Once again Degrassi shows mental illness in a realistic light, while also showing its acceptable to get treatment and its ok to be not ok. Bring on season 4 (and 5 and 6) and what other mental health challenges they will cover. ***If you want a full (though brief) list of every character that has ever suffered a mental illness on Degrassi: Next Gen and Next Class click here its actually impressive just how many they have covered.

13 Reasons Why - I am super hesitant to put this on the list as it really doesn't show mental illness rather just suicide and what lead her to do it. I haven't watched the series but I have read the book and just didn't find it that realistic at all and it was just her blaming people who made her kill herself. I will probably watch the series but haven't gotten round to it yet so maybe my views will change but after reading articles online I will surprised if it does. But I am including it along with a note saying that suicide is never the answer and that there is help available, no one should ever feel like Hannah and I hope that if you do that you tell someone rather than to just end it.
The above are just the TV shows that I know of that have shown/covered mental illness at some point. Hopefully in the future more shows will approach it and help show people that it is more common than we are lead to believe. It would be nice to be able to watch TV and relate to the charcters that are struggling with mental illness not

Coming up next in the series is movies. 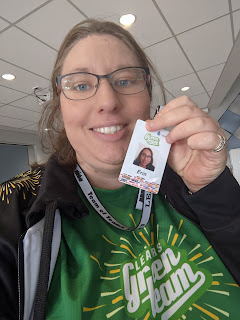